How many times do you get to have fun with a group of people you have just met? Answer: Not always. But dandeli, sure, was one such expedition that had a fun loving group and the ‘dolly gang’ was the result of the friendship and fun.

The travel began from M.G.B.S and after a good 12 hr ride we were in Dharwad. From dharwad, it was a 2 hr journey to dandeli. The game of ‘dumb charades’ dominated this segment of journey i.e from dharwad to dandeli. Everyone was involved and I’m sure everyone was happy being part of it.  Stanley farm was our place to stay. We pitched in our tents for our stay. The first day involved river crossing and river rafting.

The river rafting was the highlight of the entire travel. The clear waters of kali river was simply watchable! Personally, swimming in that water was the best part. I was LOST, if you know what I mean. The river gave 1 good rapid and the rest were of the moderate nature. The rafting instructors were good and friendly. The campfire was prepared for the evening and people gathered around for an introduction and it was dinner time.

The second day was scheduled for rappelling. We left early morning to the rappelling point, which was an hour’s drive from the farm. Since, the weather was sunny, it was decided to finish off the activity as soon as possible. The rappelling was good. Few were good at it and few tried their best and completed it. I’m sure they loved it more than the guy who did it perfectly!

The afternoon plan involved exploring syntheri rocks. The place was beautiful and with the water around it added to the pleasantness. Few people chose to stay while the rest decided to go ahead and explore and ti was worth it! I wish we had more time so that more time could be spent there. :-(

The third and final day involved Kavala caves. We had to climb down 500 odd steps to get to the caves and view the place offered was a mind pleasing one.

A fantastic 3 day travel which, personally, climbs the chart of best treks I’ve had so far. Wait, did I tell you we played holi on the last day and then jumped into the river for a good cooling time!

About 35 People showed up at the Maulali Rock Climbing Trek. We climbed the usual 450 steps and after a good warmup went down and up the steep hills few times till the legs burned with the pain which was followed by stretching to remove the lactic acid build.  Then we went around the dome rock trying to find some good surface to do bouldering and Deepam  was busy setting up the rope for rappelling across a 30 feet vertical drop.

Deepam was the first to do rappelling and few other brave hearts tried their luck and inspired the remaining to try rappelling. About 20 members did rappelling and come out confident. 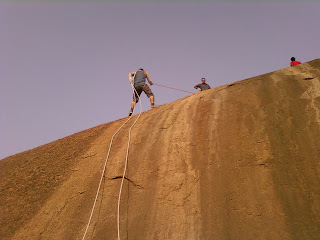 Rappelling or abseiling brings a powerful sense of accomplishment and is a vital resource in bringing about the realization that not every perceived risk is insurmountable. It was my turn to do rappelling and being the organiser people look up to you and you have to lead by example. There is no excuse or escape

I had done rappelling few times before at the Dandeli  Trek with the full equipment and a safety rope in the instructor's hand.  but Rappelling at  Maulali  looked rather daunting to stand on the edge of a cliff and looking down and knowing that we will soon be going down with only a rope for safety.  But the technique was rather easy to learn and the real difficulty was only in convincing the mind. It felt natural after the first couple of steps and then the feeling of suspension over the expanse below was thrilling.

I stopped at the edge locking the rope with the right hand grip and leaning back against the wall and posed for some photos and yes I felt powerful to stand against the gravity and walk on a vertical wall.

Immediately after the descent followed a tremendous sense of achievement and a boosted confidence. It brought the realization that not every seemingly difficult objective is actually so. This was the first ever time that we did rappelling at Maulali with just a Rope and Hand gloves using the classic rappelling technique as taught by Deepam who has done such feats earlier in the shayadri range.

Most of the first timers tried rappelling and came out more confident then before - read the comments at http://meetup.ghac.in/calendar/12663666/

GHAC now plans to purchase full  Rock Climbing and Rapelling Equipment along with Safety Gear to enable more members to try this exciting sport within the Hyderabad city.

If you want to donate towards purchase of equipment or sponsor some equipment please get in touch with the  organizers.