An entire Saturday lost in the jungle! Good to lose it. A close-to-Hyderabad trek was planned by GHAC, The Narsapur Forest Trek. This meetup, as usual, found an early response. The mode of transportation to this destination was car. Cars were arranged and the itinerary was prepared and we hit the road. Now, onto the journey. This trek was attended by 17 people. Although more people were expected, they did not turn up.

We started around 8 AM in the morning for narsapur, took the route via Ameerpet - Balanagar - Jeedimatla - Medak Road, we stopped inbetween to buy some bananas and water as there are no known hotels near the forest stretch, We knew we were on the narsapur forest stretch the moment we saw our ancestors a.k.a monkeys, and hoards of them just waiting and looking around for people to throw some food, we saw the hanuman temple on the right with more monkeys around it, lord Hanuman's Army, we stopped about 2 Kms ahead of the hanuman temple just near the aayapa swamy temple which comes on the left and parked our vehicles there, picked up our lunch boxes,water and had a quick round of introductions to know each other which is more of a customary practice with every trek. 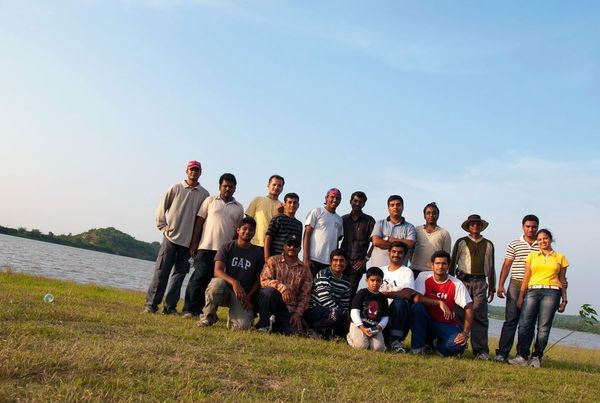 All the members were shuffled and 3 teams were formed with everyone being new to each other, except one couple who were allowed to stick together, a leader was selected for each group and was given the responsibilty to take care of the group, it was decided that we would go into different directions and assemble back by 2 pm at the same spot we parked our cars, our trek started at around 10 and lasted till 2 in the afternoon.

I lead a group deep into the forest, This step was taken intentionally, trying the trek in a different dimension. The trek was good. The forest had a good vegetation, the sun was bright and blazing, the clouds covered the sun occasionally to give us some relief, we took shelter quite often under the trees around to escape the heat. as we went inside we stopped in between and heard some noises, only to see a farmer grazing his cows, we shared some refreshments with him to gain his confidence, we enquired with him if there are hills or water ponds ahead to which he replied negatively and he tried to scare us that a police party was roaming around the jungle as if we were naxals around, we had to lie to him that we have permission to trek the forest. 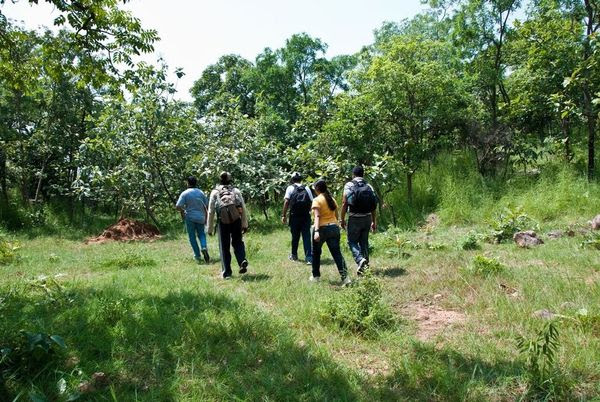 We got some calls from the other groups and tried giving out our location, but it was all green trees around, we tried making noises but no help, we thought the other groups are lost for good, on our way back we came across a large herd of cows which were grazing and we walked pass them only to realize that the biggest OX with big horns was furious to see us and was about to charge at us, respecting his territory we retreated and changed our direction, we found a banyan tree and a boulder beneath it, we all climbed it and had another round of refreshments, the shade was cool and the wind was blowing softly, it was about 12:30 and we decided to start back to reach in time.

The overall trek was easy, there were small steep elevations to climb which were easy, we found lot of small water streams around the jungle and . we started walking back and after quite a distance we could hear the noise of traffic, we came out on the road and were glad to be back into civilization, but we didn't knew which direction to take to reach the place where our cars were parked and we stopped passersby to ask where the hanuman temple is and different people showed different directions, there is no dearth of hanuman temples in this area, we were confused and called the other trekkers to come to our rescue but they couldn't locate us, we used the GPS phone and figured out that we were on some different road altogether which was about 8 kms away, we saw a bus coming and we boarded it to land at narsapur town.

All the other groups joined us at narsapur town and we went ahead to narsapur lake and spent sometime strolling and doing some recreational games. we started for Hyderabad had tea on the way and reached by 7 in the evening. Sometimes its good to venture and get lost in a small forest, just follow the sun and listen for the nearest traffic noise and you will come out on some road.
Labels: narsapur forest trek narsapur lake

Hi,
GHAC has marked the route to Narsapur forest here - http://www.tripnaksha.com/index.php?option=com_traildisplay&Itemid=1&tview=97&trailname=Narsapur%20Forest
You can embed the map into the blog post too.