Twenty One people, headed to ananthgiri hills for a night camp. What followed was a good time and a good time which was dominated by singers!

Ananthgiri hills is around 80 kms from hyderabad and offers a good place for camping. We found one such place for setting up our camp. From here, a good view of vikarabad could be had. The twilight brought out some good views of the place but we were late, as usual and we had to get to work!

6 cars with 21 people reached the place around 6 in the evening. People got out of the car and got down to work, realizing that the fading sun would offer light only for sometime. So, the girls took care of the cooking department while the guys took care of setting up the tents and collecting firewoods. Few knew how to set a tent and i was not one of them, sad. but the better part? i learnt something about it! There was no light, how could we continue our work? The cars came to the rescue. 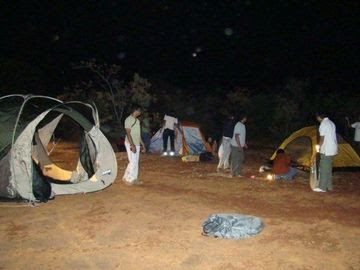 What's cooking?
The girls were quick in getting everything ready, that was required for their cooking. Few got down to cut/peel the vegetables while others were sorting ingredients out. Few guys volunteered to hold the torch and throw light! With all the hard work, finally there was rice, dal and a curry, waiting to be served.
One person was busy piercing chicken into the sticks. The chicken-pierced-sticks were handed out to guys and were asked to roast it over the fire, which was created. 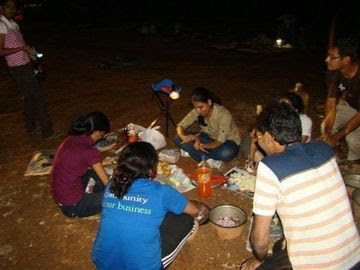 After the meal was prepared, a quick round of introduction was done around the campfire. Then, it was time to eat. There was light shower, accompanied by a gushing wind, when we commenced our food. Few of us had to rush to save the tents, which were not grounded. The water drops were for a little time. Post dinner, it was singing all the way. 3 teams were formed and a good number of songs played. Well into the night, the singing carried on and at some point it was decided that the group will go out for a night walk. A good walk and the singing began....again! We found a place downhill which offered a beautiful view of the lit city far away with the starry sky. The moon with its beautiful crescent was a watch. We sat down and people sang few good numbers. One of them suggested complete silence and enjoy the view. I liked this part. A sense, which is hard to describe, set in. Imagine in a surrounding - A cool breeze hitting your face, on a place which had a picturesque view, under the star-filled-sky. So, that was it! It was time and we decided to return. The singing went on! and when we reached back it was time to play cards. A good time with cards. I learnt something, for i knew nothing about playing cards. 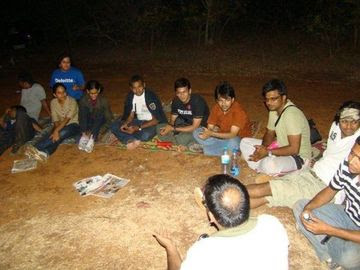 What's with the toothpaste?
The maha-idea of one/two of the members, to apply toothpaste on the face of sleeping humans. I'm sure they had a lot of fun doing so and in the process being 'called' by a person on whose face they tried to apply. The best part was the explanation of what 'actually' people thought that paste was [LOL as i think of it!] 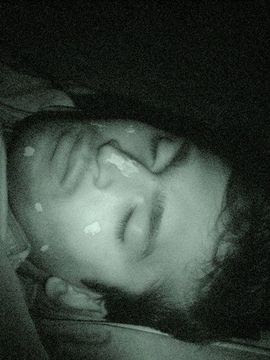 The next day, we had a short walk to catch the first rays of sunlight but unfortunately we couldn't see as the clouds has blocked the view. So, had to return, slightly disappointed. We reached our base, packed stuff and left the place with a pretty long ride back home, with of course, fun memories placed in the brain! 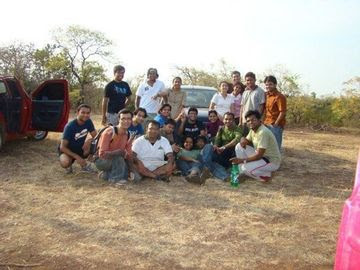 Thank you Ranjitha, for all the cooking and Anitha, Shraddha for supporting the cooking department. Thank you monty, srikanth, prasanna and nataraj for holding the torchlight for sooo long and assisting the chefs!
Thank you, shwetha, for the wonderful chicken [i think the left over marination paste was applied on someone's face! oh no. he thought so!!!]
Thank you everyone for the humor and fun.
Labels: GHAC, VIkarabad

guys we are planning for camping around hyderabad can you guys help us to find a good place where we can see clear sky away from the city lights, can have campfire and etc please send me @ kashyap.09@rediffmail.com.....

Please get in touch with GHAC office directly on phone for specific information. The number is on our website ghac.in