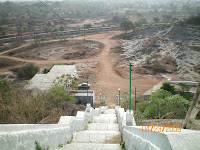 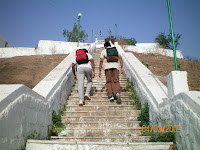 Near Ammuguda railway station is a beautiful Hill with a dargah, known as Khoe Imam Zamin, it has steep steps, The hill is surrounded by water on one side, the steps are just 250 in number top of the hill the whole bolaram, sainikpuri and tirmulgherry is visible

On the other side of the hill is a small mandir, good to see both a mandir and a dargarh co exist on thw same rock hill

The Dargah on the Hill is dedicated to Imam Reza

On 23rd April 2009 We trekked at this hill for 3 hours climbing the steps, it was a bit hot due to summer but a good place away from the city traffic and dwellings, the surroundings are nice with small rocks and shrubs, this place will be even better in Monsoon and winter

It has a steep cement road for vehicles, that can be used for practice running up and down 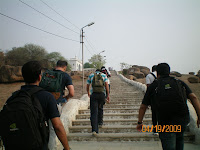 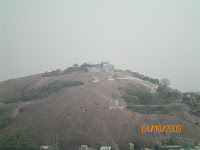 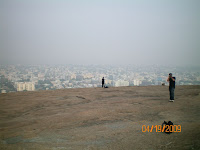 Preparation for the Everest Base camp trek at Maulali Hill

We are frequenting to Maulali to climb the steps as that's the only nearest hill in Hyderabad that can help us prepare us for the Everest Base Camp Climb, We plan to get used to climbing by climbing the maulali steps multiple times up and down with heavy backpacks, we started with 3 rounds, and are now at 6 rounds carrying 10-15 kgs back packs, target is a full day climb up and down about 20 times before we start on the Nepal Journey

We had been training for over 2 months for 3 hours daily, but this steps climbing with backpacks is the ultimate thing that can prepare a trekker for the EBC climb, although fitness doesn't guarantee that the trekker can reach the Base camp, but it puts less of a dent in the hike speed.

High Altitude and cold is altogeter different thing which only aclimitasation, proper clothing and slow ascent will help and the effects are different for everyone, even fit people get sick up there, but me and my team are all set to go the Base camp, no matter what it takes and proper planning, prepration and fitness goes a long way to achive it

Some info on Maulali hill
The Moula Ali Dargah is 25 Kms from Nampally and was built on the site of a miracle According to the story, a Muslim princess experienced a recurring dream in which she saw Ali’s handprint on the side of a mountain, After years of searching for the handprint, she finally came to the area north of Hyderabad, inquired among locals about their knowledge of such a handprint, and found the image on a rock atop the hill where the dargah was later built.

Another miracle goes that a Moghal general with his army assembled at the moula ali plains to attack Hyderabad, the then Qutub shahi ruler of Hyderabad prayed on this shrine followed by which the next night thousands of lights appeard on the mountain hill, fearing a large army comming to attack the general fled with his soldiers.

Moula(Master) Ali, in case you don’t know, is the son in law and cousin of Prophet Mohammad. there is wikipedia article for those who hear Ali Ali all the time in the songs and want to know more about Maula Ali can visit this wikipedia article

BTW, this dargah is one of the 11 heritage sites identified by “Heritage conservation committee” of HUDA. To make life easy for the visitors there is a long staircase to climb up the hill to reach Dargah.

A travel to a place surrounded with hills and picturesque views, my weekend was made by this trip albeit i wished, secretly, if i could continue my stay for few more days. For those of you who missed the experience, here's a breakup of the entire journey.

The morning was pleasant when we reached vizag but soon the pleasantness was to be taken over by sun god's powerful heat rays. I could feel the temperature climbing when we started off from vizag in the mini bus. Sad for me as everyone had taken the left side of the bus escaping the beams while i had to settle on a seat on the right. The griping was on for sometime but later on it switched to jovial mode when i with other people, started sticking our heads out of the window to have the rushing air hit us. The road, as far i remember, had no potholes and with few vehicles on the road, we were free to stick out as long as we could [though on the responsibility of self]. The only thing i missed during this enterprise of mine was a good song in my player which could sync with the mood and the experience for that time. The initial part of the journey had fields on either sides with small hills in the background. A momentary thought would project the fact that you are far away from the cramped, gaging and high decibel city side. The first stop was borra caves.

Borra caves: primarily contains stalactites and stalagmites, varying from small to large. There are legendary stories associates with this places. The caves, through out, imparts an arty thought with yellow lights illuminated at spots to produce a beautiful image of natural limestone carvings. The cave has small worship spots of lord shiva, who is associated with the legendary stories of the borra caves. The cave gave a low temp. conditioned air for people who wanted to escape the heat. Fews yards of walk and you hear bats crying from some dark corner giving a sense of adventure (if you remember brady barr's episode in a bat cave). Additional point to end the paragraph, lot of pictures [with you in it] to take and arty people would get the best out of it.


Next stop: After the view of the caves, it was time to head to our destination. The journey now was full of stops! Not the check posts but the forceful stops by the tribal inhabiting the region. There were plenty of such stops where we had to give them some money. At certain stops, we saw people getting into fight for not letting them pass through. Arguments flying from both sides. It was alright at first but was nerve wrecking when it went on frequently. I was told, this kind of stops happen only twice a year. Lesson: Validate if such events happen before the tour is chosen.


Reached our place: We reached our destination sometime in the evening. An isolated place with few people which was just right. The place had a hill behind and it was decided that we refresh and trek the hill. So, there it was. A night trek. Four teams were formed and the team reaching the top first received chocolate bars from the organizer. In fact, every team got a bar in the end. How nice is that! The hill was quite steep covered with small bushes. It was fun trekking in the twilight hour. Yes, few scary thoughts of creatures lurking around. Thankfully, none showed up! We reached the 'summit' and waited for all to be there for the awards ceremony. Awards handed out, pictures taken, merry talk and the cool night under the moonlight was something to embrace. After a while spending atop, it was time to descend. We reached our stay place and were awaiting dinner time. We spent sometime relaxing and headed out for dinner. The dinner prepared there was excellent but was marred by delay from the vendor.

Next Day: It was the day to trek a steeper hill. We started out in the morning, again a pleasant one, to the hill. The entire group was split into teams and were free to choose their path for trek. The initial segment was filled with dry plants which left few light scars on teammates arms. Then, followed the muddy and slippery slope and few found it tough to walk over, opting to crawl instead. As we headed front, we got better looks of the hill. Mostly, covered with dry plants. Having said that, there were trees around as well to take shelter and if someone wanted to be mowgli. After a good climb to the top [coupled with exhaustion and panting] and spending sometime there, it was time to get down. The climb down was exciting as we chose to go through the dense trees. The ground here was covered with dry leaves. In spite of a neat path that lay ahead, people opted for random path selection by which they could find their way down. The climb down ended and we headed out to cool ourselves in the small stream of water that was flowing at the foot of the hill.

It was time now to pack up and head to vizag.


We had our packed lunch in the bus, on the drive, after which most of them had a good sleep. When we got up there was vizag. We visited the rama krishna beach. We stepped in for 30 minutes or so as time was running out. After the sand-coated-feet visit, it was time to catch the train back to hyderabad.


All in all, a fantastic journey that i'll remember for a long time to come.
1 comments
Labels: Araku Hills, Hyderabad adventurers, Travel and Journey 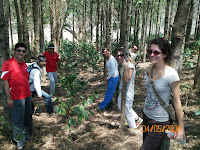 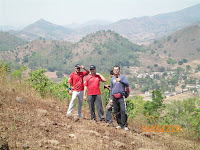 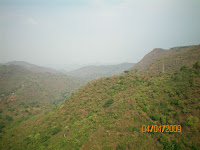 Had a great time at Araku Valley, except for the time lost at the tribal checkpost's and waiting for other members to get ready the next day

The night trek was great and competition added to the fun and tested our limits, I wanted to be up the hill to see who comes first and i took straight steep path up and boy let me tell u I was almost out of breath reaching up the hill, I am sure those who called it just a mold would think twice before they say it again

I thank you all for you cooperation all along in spite of the glitches, each of you was a great team member, I thank Rajan and other team members who helped me in organizing without which it would not be possible to manage everything. Thanks to Javed for the cellone mobile he carried which came very handy

Taking a Bus was a good decision, we were together all the time and had lots of fun, Borra Caves was amazing, nature at its best

The full vodka bottle effect after doing the seesaw turns at Tyda restaurant was amazing thinking of which i still have some of the nausea feeling left in me, cheprai waterfall was almost dry but the surrounding hills were great, they tested our limits in the hot sun, I wish we could have done more trekking

There was lot of learning from this trek for me as a organizer and the foremost will be utilizing time to the fullest on the next trips.

I request all the participants send your feedback including bats and bricks and how we can improve the group, please spread the word across and invite like minded people to join and participate.


The Araku trek photos are uploaded at http://www.meetup.com/hyderabad-adventures/photos/

Some of the members have also shared their photos online