This write-up, on Kids adventure , is given by Vibha Naik. Thank you for the article, Vibha. So, GHAC adventurer and organizer Vibha, on the first ever GHAC kids adventure...........

Most kids got up and reached the pickup points on time - they were surely very excited about this trek. Processed with rituals like disclaimers and some queries that some parents had, we were off on the bus. Keku took care of the kids in the bus, got them mingled up, played games and put them in the picnic mode.
On reaching there, everyone was very excited to see all the adventure activities that was awaiting. Some jumped onto the swings, some perched on the natural log benches, some watched the quacking birds.

They served us a welcome drink - neembu pudinah and that cleared our throats for a round of introduction. All from different schools and different grades (some in the school of life) were excited to know about each other. Some kids discovered that they belonged to the same school, same class but did not know each other (as they were in different divisions) and some discovered that they stayed in the same apartment complex, same floor but unaware that they all were coming. Pleasant surprises! Then came the breakfast - idli chutney sambhar and we stuffed in some calories before the exhaustive day began. 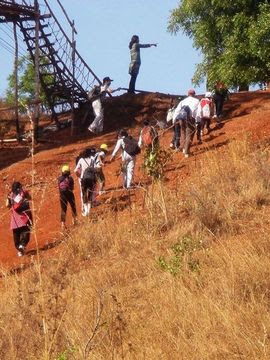 A brief warming exercise conducted by Keku and Ranjanji helped stretch the body and muscles, preparing for the upcoming feat. The groups divided into 2 groups - one for valley crossing and the other for vertical surface climbing. After dressing up with the safety gear and guided by commandos, the activities commenced. The bold kids were the first to jump and others slowly made up their minds as they saw others perform. The kids were having a fab time - some wanted to repeat them as well. 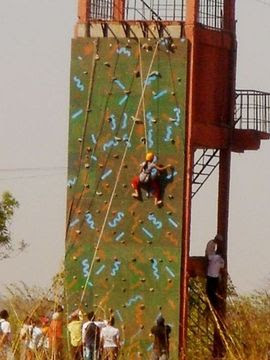 Then came up enthusiastic parents giving a try and to their surprise, they did much better than what they expected themselves to perform. Water with glucose, vitamins and electrolytes (read Tang) was made available in ample quantities to avoid dehydration.

Then we took a short break for snacks and then started with rope walking and the burma bridge. Burma bridge was really hard and it was surprising to see many young kids perform the feat of course with all the safety gadgets. Some parents followed too. 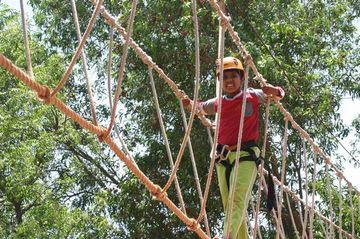 And we were hungry to the core again. The lunch tasted so good - was it the preparation or just the fact that we were terribly hungry? And some parents were tired and sleepy, so caught up on the commando nets to swing and feel the cool breeze for a short nap. But kids, they wanted more.....And we began activities in the shade. First 'Housie' was conducted by Jaee and gathered so much excitement in kids and all. Then Ranjanji has an interesting game for kids convincing the importance of concentration in all the activities that we do. Venky then impromptuously conducted a concentration game which everybody so enjoyed. Then Keku began an innovative game for kids which helped them develop speaking skills and promptness. And yet the game was so much fun. 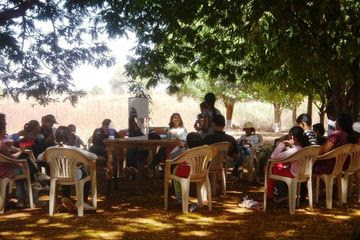 Then we were ready for some outdoor activities again - Adults tried their hand on archery while the kids were sent for river crossing. And then came the hot samosa and tea. As the sun started setting, we were ready for the guided jungle trek. Kids found this really interesting as we walked through the thorny bushes, posed for pics, spotted some wild boars at a distance and made some eerie sounds. We were back after the sunset on the ramp that gave us a beautiful view of the forest that we trekked. 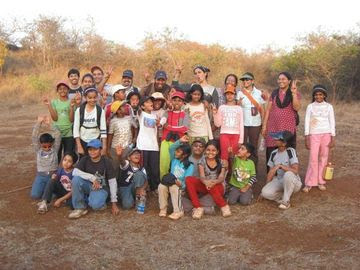 Yes., All were tired and after a brief vote of thanks, we climbed up the bus on our journey back. Most kids as well as adults slept on the way back, but some super active kids were still enjoying the fun. Back in Hyderabad, all dispersed as they shared their contact numbers and hoping to keep in touch as they shared a memorable day out together.
Labels: GHAC, Hyderabad, Kids Adventure, summer camp

interesting activity for kids they love to play