Rachakonda Hills is at a distance of about 40 kms from Hyderabad. A group of 26 GHACians assembled at Koti at 6 am in the morning (or should I say on a VCM – very chilly morning) when the temperature was about 13 degrees Celsius.  We started towards our destination at around 6.30 AM in cars and on bikes (though some bikes were parked in the paid parking of Ramoji Film City () since we had space in the cars. From there we went ahead towards our destination (had breakfast and packed our lunch on the way) and reached the hills at around 9.30 AM. 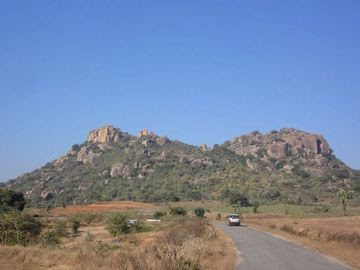 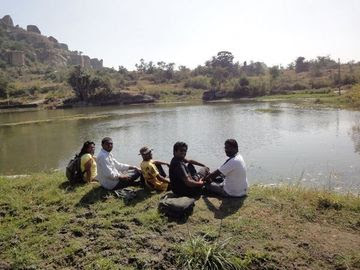 Well, this was not Rachakonda Hills. To our amazement, it was RACHAKONDA HILL RANGE. A full fledged range of hills which will take not less than 2 days to fully explore / trek. Since this was an exploration trek we did limit our climbing to only one hill. The entry to the hill range was through a small door-way well constructed with two pillars (approx. 5 mts apart) connected with a beam (constructed by arranging well-cut rocks) at the top. Cement or mud to hold the rocks together were not seen. Maybe the good old architecture / civil engineering. 
At the entry point there was a huge boulder and some people got onto bouldering (basic rock climbing)  while others moved on to climb the hill. It was almost a 45 degrees (on plane) climb for us. One that was not very difficult. After climbing the hill and going a little further we came across a small temple (Shivalayam – The temple of Lord Shiva) on the hill top. We rested there for some time and then proceeded there for further exploration. Again a set of boulders were encountered and people who could, did the bouldering.  To reach the boulders 3 or 4 people took the difficult route of a vertical climb and clearing the thorns on their way to the top. Others discovered a simpler route to reach the other side. Some amongst the 2nd group did go to bouldering. 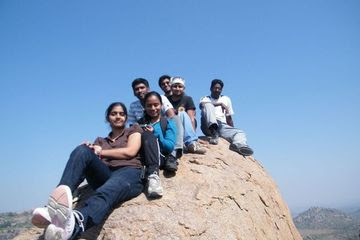 From there, there was further exploration and as we went ahead we found a VALLEY – well, what a view that was. It seemed there was a river many years ago that has gone dry, and this was evident from the way the path in the valley meandered. Certain segments of the boundary at the top of the hill were well arranged by rocks cut into rectangular pieces. 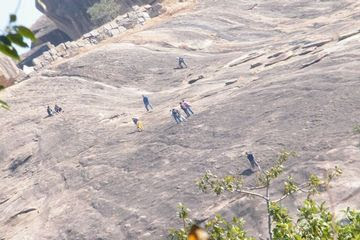 After spending some time at the top of the hill, we moved to some distance and again rested for about half hour. Some folks brought snacks which we all shared and then moved back downward to our starting point where our cars and bikes were parked (we took a simpler route than the one which we took while climbing uphill). A few people started climbing a tamarind tree and starting plucking fresh tamarind. There we finished our lunch, bottled water that was being pumped up through a bore in the nearby agricultural field, freshened ourselves, and then moved back to Hyderabad. 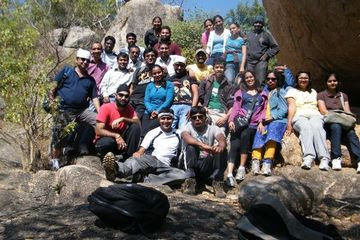