A team of 20 passionate Trekkers, a herd of fun lovers indeed, started their journey to experience the rarest of the rare, the exquisite Mysterious Island. Lone amidst water, this island is located right in the center of the NagarjunaSagar Reservoir, Nalagonda, Andhra Pradesh.

True to the title, the entire trek was infused with mystery. Filled with excitement, each juncture was bringing a surprise on this trip.

From KambalPalli village, the group started moving towards the Island. First exciting occurrence was climbing the initial hill that would give us a scenic view of the Island. The sun was shining bright, an unbroken stream descending on us as we continuously ascended up the hill. As we reached the hilltop, all of us were wilting due to the blistering heat. Most of the trekkers started cursing the organizer and also themselves for joining the trek. 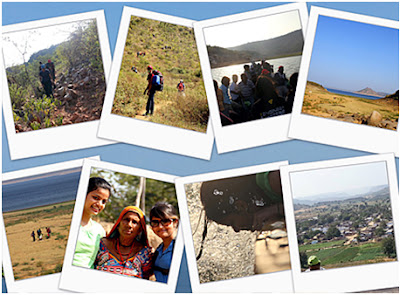 After a 15 minutes halt, we started walking again. This time all of us were prepared for the next surprise or adventure. We kept walking for almost 3 kilometers and were day dreaming about the destination which was some distance away. Some of them got dehydrated in the radiant heat. But then- we reached the next point and stopped abruptly, the fascinating first view of the Island greeted us. We couldn’t bring ourselves to tear our eyes off it.

A hill in the middle of the oceanic water, surrounded by numerous hills, the white colored temples on both the edges of the hilltop, greenery around the shore, the herd of sheep, goats and cows eating the grass simply reminded us of the romantic movies that were seen during the college days. Each of us started humming romantic songs and smiles were all around. It was fun watching each other. The Island seemed a perfect honeymoon spot. We could romance with the nature and the photographers perfectly captured the melodrama happening around in their clicks. 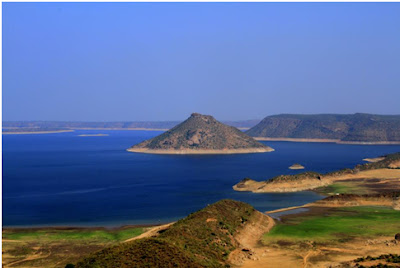 Soon we started descending the next hill to reach the Island. It was around 2 kilometers stretch and it took almost an hour and half to reach the shore. Relaxing under the rock shade, we all were admiring the nature and building the rapport with the other trekkers. A few started walking on the river bank and the rest started following. We had a competition of pelting stones in to the water and this time no one could win the title, as we had to soon get on to the boat.

We boarded the boat. As it started moving towards the Island, we were delighted by the beauty of the nature. Away from the urban routine, this experience made each of us think of settling ourselves on the serene Island. After 20 minutes of boat journey, we reached the Island. This Island is called as Yeleshwargattu, popularly known as Mysterious Island. We got off the boat and soon scattered around the island for our respective cooking tasks. A few went to collect the fire wood, few were busy cutting vegetables, others got the water from the reservoir, while the rest were busy clicking pictures and describing the crocodile stories to scare the crowd.

Soon the Sun started disappearing below the horizon and we continued cooking. The best delicacies were prepared on the fire wood. Few trekkers were flashing the torch light for quick preparation. The dinner was ready with Biryani in the Hyderabadi pulav style, Chicken Masala, and the tomato curry to go with it.It was a special meal or the hunger must have been the best sauce for the night. 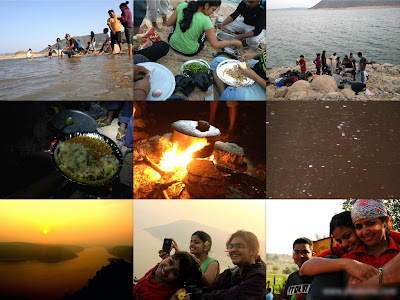 After such a delectable dinner, all we could think of was warm sleep in the cold windy breeze. But of course, the trek had its own surprises. We had to stake our lives and start climbing up the hill on the island. Every step reminded us of our favorite God. The dense and the dark atmosphere, the blowing breeze, the sound of the bees and the dead leaves literally reminded us of those haunted stories heard in our retrospect.
Enduringly, we all culminated over the hill. Closing our eyes and the torch lights as per the organizer’s instructions, we lay down on the floor. As we opened our eyes and gazed at the sky, the common feeling among us was Wowwww…..! The sky exploded with a million stars. Few of them spotted the shooting stars and we were rejoicing the diorama of the sky.

Few trekkers who were feeling sick, turned active, few fell asleep soon and a few were still hanging around capturing the pictures. As per the instructions we were not supposed to move left, right, front or back. We were supposed to sleep in the given place.

Out of the blue, when everyone was deep in sleep, something poked the organizer’s head. He ignored it expecting it to be some sharp edge of the bag. Soon we discovered that a beautiful golden-ish black Centipede has bit him. It was stuck to the bag like a key chain and was all set to attack the next person. After a little research on Google, we found out that it was not fatal. After the incident, sleep simply fled from our eyes and somehow we managed to spend the night.

The Sun was rising up the horizon. The view around was exemplifying. We were on the top of the Island, with two temples on both the edges. We were stand right between the temples and all we could see around was water. The sun rays in the water, the hills all around mesmerized us. Amazing pictures were captured by the photographers. Despite having the better subject around, they were too generous to click our pictures too. 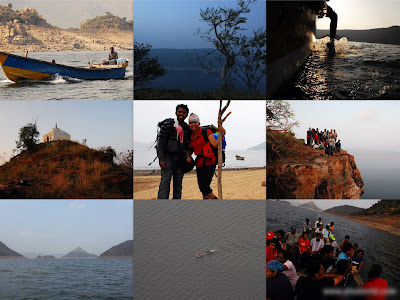 Before long we started descending from the Island. Tapping our feet in the water for a while, we boarded the boat again and this time the ride was around one hour through the valleys and the landscapes, we reached the other end of the shore. It was time for us to test our endurance level, as the heat in the sky and the hill at the shore reminded us of all the Glucon-D ads. Soon we ascended the hill and trekked and scrambled for 6 Kms reaching the KambalPalli Village.

Another surprise was waiting at the village. The world best Rice and Charu (Rasam) was prepared by one of the sweet ladies in the village. All of us couldn’t resist eating lunch twice. We started moving towards the bus stop and soon took a bus. 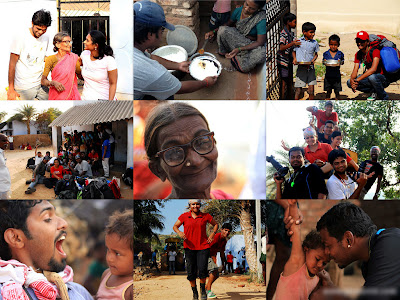 It was the hardest moment for all, as we had to reluctantly say good bye to each other. It was the best ever experience of life and had set new standards for our future choice of treks. This trek was a blend of every single thing a trekker expects including trekking, scrambling, boating, cooking, eating, climbing, and photography among the others.

Nice one...memories flashed hard as I read through.

Thank you so much Guys.. THe write up isnt great... the acts done on the trek were simply mind blowing.... :):)