The Hyderabad Triathlon is scheduled to happen on the 20th October2013 at the Gachibowli Stadium and captures the essence of endurance,fitness and sports. Though it's not a competition race it is perfectly designed to be a challenge to test your fitness and can also be a fun event to do along with friends. It will be a blast for athletes of all abilities! 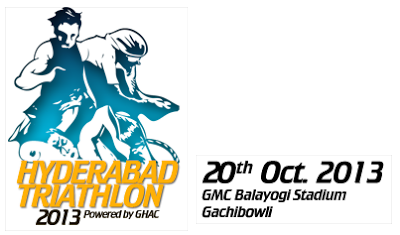 This year the Hyderabad Triathlon has grown to a new level with over 500 registrations and addition of Half Iron level. With Just a day to the event we are almost full and only a few slots are available in the
Sprint, Novice and Team Relay events. For those who do not know swimming we have the Duathlon category which includes cycling and running over varying distances. for registrations please visit
www.hyderabadtriathlon.com

On Sun 20th October, the Half Iron and Olympic Level will begin early in the morning with swimming in the Olympic pool of the GMC Balyogi Stadium, followed by cycling and, running on the ORR service road and
finishing at the stadium. The Sprint Level will have cycling first, followed by a run on the ORR service road and swim in the Olympic pool. The Novice Level with cycle, run and swim will be conducted in and around the stadium itself. In the afternoon participants will try their skills in the Team Relay Triathlon and Duathlon. There is a Para Triathlon Relay event for the specially-abled athletes which will be an inspiration for many others.

We are witnessing a great interest from triathletes from across the nation and going by the response to the event I am very jubilant that the Hyderabad Triathlon will quickly become a favorite of athletes
from across the Nation.

This event would not have been possible without the inspiring leadership of Deepam Morparia the man behind the initiation and success of the event and all the participants, volunteers and supporting partners who are working hard since past 6 months to make this year's Hyderabad Triathlon a huge success.

Wishing all the participants a great and enjoyable event that will bring out the best in them.