Backpacking- How not to pack for Treks.

By- Ankitha Sista
My first 3 day trek with GHAC was particularly memorable for me and possibly my co-adventurers. The reason primarily being my abnormally huge backpack, which probably had in it all one needed to start pulling off a Walden at Kondaveedu Fort (That's where we went. It was a 2-day trek, though). I didn't think twice about the stuff I packed in it, and thought it'd be perfectly normal to carry such a huge back-pack (We see them in them movies, right?). I made lots of lists and was pleased with myself when every item on the list given in the meet write-up was crossed off. That huge stupid grin of mine was wiped off my face when I reached the Secunderabad Railway Station. "Are you carrying that for this trek" was on everybody's minds and a few faces. "Just how much does your Backpack weigh?" was a question frequently asked. Just after the "What's your name?"

I loved it, because I made friends faster than anyone else did. ;) Now how that happened was because the question that followed the ones mentioned above was "What are you carrying in it?". Smugly, I'd reply "Food", which was, the truth. I carried food sufficient for the gang for about 3 days, and other camping luxuries that weren't on the list, but in my back-pack because I set my eyes upon something and thought "Oh, that would be essential if something happens". I considered all possible case scenarios of what could possibly go wrong on the trek and Ta Da! There lay my elephantine backpack.

Coming to the approximately precise 'configuration' of my backpack, 50% of it was food. I packed food, retaining all my Indian-ness. Khakras, Theplas, Dhoklas and all the usual Gujju snacks and bread, jam, biscuits, butter, glucose, wafers, chocolates and the likes. So basically, I walked in to the Supermarket, went stashing everything I found on the rack in my trolley. Much later, in Phiraangipuram, I came to know what a squander that was when I saw the number of parcels our dear organisers had packed for lunch. Damn! I should have known. Nevertheless, the food stuff I brought did come handy because a
couple of them were foodies like me. :D

Another slip up was the carrying extra clothes. Remember, you won't need them on the GHAC treks. The schedules are really well planned and perfectly executed, so, the question of a What-if… happens doesn't arise. And the extra clothes I carried were Jeans- a total no-no on treks. Ideally, you could come
wearing clothes you'd want to trek in and another pair of clothes. But I didn't. And that made a lot of difference.

The other misjudgments included carrying my usual supply of toiletries I do, when I'm on an out-station trip. This was, clearly, not one. Diyanat later told me a few tips for carrying as minimal as possible. The smallest/ minimum quantity package the product has on offer should go in. Simple, isn't it?

It was when I began reading some climbing literature that I got to know how crucial even a milligram of weight is. People cutting off unnecessary buttons, toothbrush handles are the starters. I'm improvising on my packing with every trip I take.  As for the packing bible, what packing bible? Just stick to the list given! 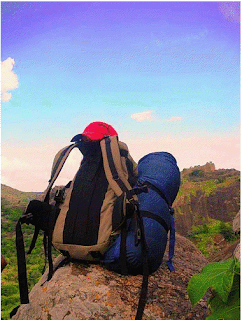 A picture dedicated to my back pack should give you an idea of why it became a standing joke on the trek. 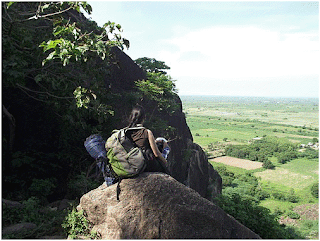 This is for a comparison to scale since the other picture doesn't provide any.
Labels: how not to pack you backpack

A pic ad for Liviya rucksacks..!