Before dawn, the sound of the alarm clock and the cold wind fluttering throughout, has awakened me from the sleep. The ripple of excitement within to experience the unpredictable was strong.


Before long I reached the meeting point. Looking at the dedicated volunteers helping the participants was great. With the transport provided by the organization the Participants and the Volunteers reached Shamirpet, Hyderabad.


The Sun was rising up the horizon and the enthusiasm among volunteers to watch the first ever Hyderabad ROCK CLIMBING CHAMPIONSHIP 2012 was exhilarating. For some of the volunteers the day began with Photography, as the sky was tinted red, and it compelled the volunteers to capture the panorama.


Soon the volunteers were briefed about their tasks for the day. They started putting up tents, arranging breakfast, carrying crash pads among others. 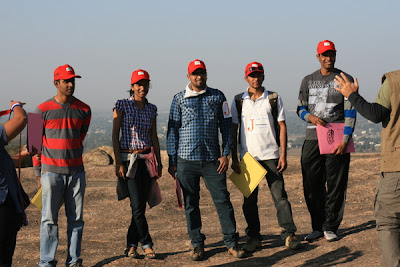 A set of 15 route Judges were assigned the boulders for judging the climbers. They were briefed about the judgment criteria for the climbers.
Breakfast was served and everyone there had their share of idlies and wadas.
With great spirit, the participants across the nation had come to participate in the championship. The siren was blown and the participants started their move towards the boulders.


A set of 15 boulders were finalized with diverse degree of difficulty for the climbers. At first, it seemed to be an act of impossibility for the new comers. But as the participants started climbing the rocks, it was fascinating to watch the sense of ease towards the rocks. 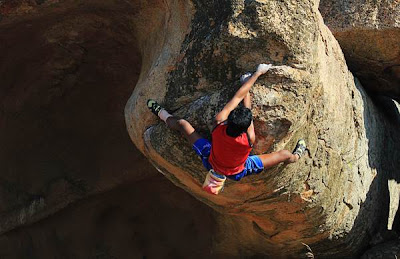 The zeal and love for such an indifferent sport made everyone’s blood run cold. Passion, Zeal, thrill, excitement, anxiety were not the words. All that was seen there was love and fascination for the rock that hooked the participants to the rocks.


50 passionate climbers across the nation participated. 12 belonged to Hyderabad and rest were from Delhi, Bengaluru, Pune and Kolkatta among others.


It more or less seemed like they were super humans and had their innate talent and techniques on the rocks.
The first round began at 8 am and ended by noon.
The lunch time arrived and this gave an opportunity to talk to people from different parts of the nation. A special tadkedaar Hyderabaadi Biryani was served to everyone. After eating one of the delicacies of Hyderabad, everyone proceeded towards the bouldering terrain. The winners of juniors girls and boys and senior women were announced. 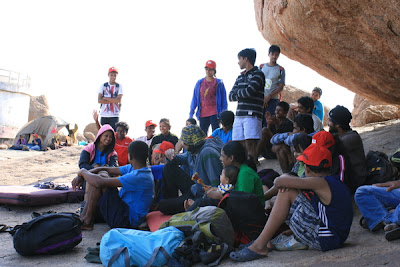 There were 6 remarkable finalists in the senior men category. The task was to complete four boulders with less number of attempts. The duration for the completion of each rock was 4 minutes. The difficulty level was very high and the finalists were not allowed to see other finalist’s climbing. 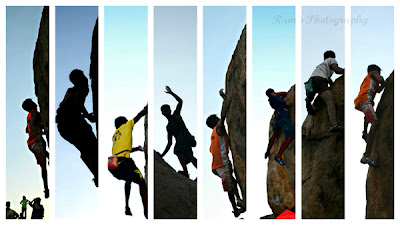 As the final round began, the audience was over flown with enthusiasm and went yelling, blowing, whistling, and clapping to encourage the finalists. The encouragement was of a different level as we could hear people cheer in different languages.


Soon the winner was declared and with a heavy heart we had to say good bye to everyone.

This spectacular event served as an inspiration as most of us wouldn’t even had known the definition of Rock Climbing.
May Hyderabad experience more such amazing events and produce the best climbers from the city.