Exploring the Wilderness of Ashwarao Palli

Exploring the Wilderness of Ashwarao Palli

The dawn was flooded with laziness. Here begins the conflict between body that insisted to sleep more and passion that craved for adventure. This made me reach the MGBS (Meeting Point) at 6 AM. With a group of 7, we boarded the bus towards AshwaraoPalli, the magnificent location for scrambling situated near Warangal district of Andhra Pradesh.
All the trek mates were charged up and excited to experience another adventure with fun. There were 2 first timers who were mentally rehearsed to encounter any kind of thrill. The others were proficient and were set to explore the uniqueness of the location. 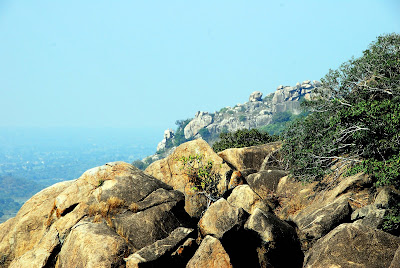 Before long we reached Ashwaraopalli. A lady living in a hut served us hot tea. She insisted that we buy food in order to earn some extra money. With the instructions of the ‘Boss’ (Organizer), we already packed our lunch at the meeting point. We began the exploration by moving towards the hill. As we proceeded, we could see a snake crossing the road, which made most of us run towards it, but to our disappointment it disappeared out of our sight. After walking a kilometer, we had a warm up session as our organizer mentally prepared us to face the wild.
Soon we started climbing the hill through erratic passages encountering the rare trees, insects and rocks. We progressed towards the Rocky terrain and began scrambling. After a non-stop half an hour walk, we had to boulder a patch that looked scary at first instance, but with the encouraging companions around, it was a cake walk. To everyone’s surprise, this journey soon turned into a foodie’s trek. A trek mate got a watermelon to start with. All of us fetched our stomach with what we thought was the best Watermelon in the whole world. Photographers began clicking the pictures and then we moved towards a patch where we could see langoors clinging to the trees. This scared us as we were carrying bags with plenty of food.

There we began ascending again and this time it was crossing the steeps. Getting down the steep was alarming as there was a thin line between life and injury. Soon we reached a rock above the cave. All we could see there were bats flying around. The Bats seemed aggressive as an eagle was hunting for a bat. We were petrified by the scenario as it was a complete Bat circuit with a dingy smell circumventing the caves. One of the trek mates got excited to click the image of the scenic view but soon, the hue & cry inside the caves made us move to some other patch. 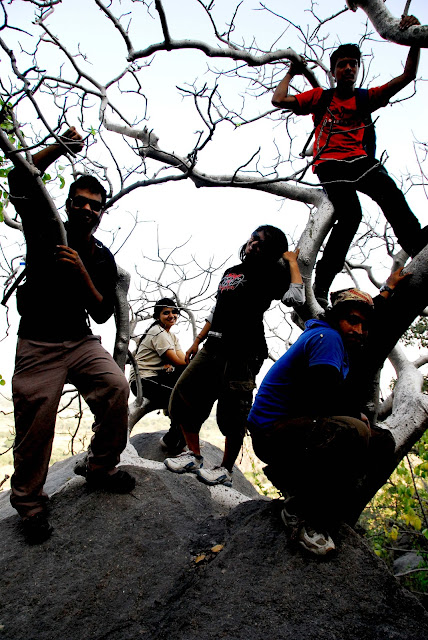 Coming back to the previous patch, we explored a cave inside the rock and started some Chimney techniques to climb up and down. While others were enjoying the food, the organizer and some over enthusiastic trekkers started exploring the cave and trying different ways to come out of it. Post this exciting activity, we had our lunch that included Fruits, Dilkush, and Dilpasand among other delicacies.

Out of the blue, the organizer decided to make the trek more challenging and made us do some back breaking scrambling that took the life out of us. Another adventure was experiencing the blasting quarry. We were all prepared to experience the manmade disaster by hiding ourselves from the quarry employees.

Finally we had to cross a terrifying steep and proceed towards a blooming photo session with proficient photographers around. Before long it was time to board bus and we said 'au revoir to the group.