Masanagudi Trek-2 was great fun, We started on 1 Oct 2009 at MGBS at 6 pm from Hyderabad in KSRTC Volvo bus to Mysore, everyone was on time and were in the bus before the wheels moved, on the way the bus stopped at Jadcherla for dinner, we had some hot spicy food at hotel munawar, the bus moved slowly via Kurnool as the roads were all flooded and the downpour was heavy, looking out of the windows we could see the water overflowing all over the roads, we were lucky to pass Kurnool but were delayed by 3 hours and we reached Mysore at 10:00 am, had our breakfast and boarded the mini bus on the way to Masanagudi, another 3 hours drive took us via Bandipur and Madhumalai forest where we could spot some tuskers and deer.

We reached Masanagudi at about 1:30 PM on 02 Oct Afternoon and were received by our hosts Suresh and Padmini who have converted their ancestral home into a resort with 4 large rooms that can accommodate 5 persons each comfortably and we adjusted ourselves in 3 large rooms, Divyani who was the only girl shared a different room with Padmini and her daughter, The resort is surrounded by 100’s of coconut trees and green grass about 100 meters all around, there is a river flowing about 200 meters from the resort where animals usually come to drink.

After a long journey from Hyderabad we were all hungry and had some good vegetarian food as it was Gandhi Jayanti so no non veg was cooked, After lunch we went to the river opposite the resort, in the evening we went to a nearby water stream and spent about 2 hours watching the water flow, the birds sing and occasional visits by the languor who were amused at seeing their distant cousins. we came back had our dinner and did some masti at the bon fire sharing jokes, singing songs and playing some games, midnight and we went to sleep.


Next day Saturday 03 October we got up early to witness heavy rain till 9:30 AM, We had out breakfast of idlis and puris and packed our lunch of boiled eggs, bread and curd and lemon rice, Suresh our host insisted that we plan some other event like going to ooty instead of trekking as it was raining, even the guides were reluctant to take us in the forest, I was adamant on going ahead and said there is no Murphy in GHAC club, that’s called taking executive decision, the guides were called in and we went ahead and after it stopped raining by 10 AM

The weather rest of the afternoon was mostly cloudy with a slight drizzle now and then, the cool breeze continued blowing hand in hand with the drizzle, as if it has some kind of arrangement with the clouds, it rained heavily after 3 PM, but that couldn’t stop us from trekking, we went ahead and faced it all, the path was muddy and slippery and steep, we had to traverse over stones, rocks and boulders, since it started raining heavily we moved away from the rocky paths, safety is priority in GHAC, we take calculated risks that are fun and helps one overcome fears and inhibitions, there were minor injuries that were treated instantly with first aid on the spot.

we had close encounters with wildlife during the trek and night safari, some of us witnessed, languor’s, bears, deer’s, antelopes, bison, elephants, stag and variety of birds and flora and fauna, we found the head with horns of an antelope which might have killed by a tiger or leopard. We plucked fresh amla from the trees to quench our thirst and the red flower of the cactus plant was sweet and delicious.

The Call of the wild made us keep in a close group together, we had heard stories from Suresh of how wild animals like the hyenas isolate and attack so we kept together, only recently was a French lady trampled upon by a elephant, As we moved a Stag deer suddenly rushed out of a bush and startled all of us, I was also doing the head count now and then to make sure none was picked by any wild predator.

we spotted the paw print of the leopard which was fresh as if it just went by us, suddenly panic calls from the deer’s and other animals got our attention, the guide whispered it could be the leopard or the tiger hunting for food, we all went pin drop silence and froze looking in all directions to catch a glimpse of the leopard or the tiger, as we moved we could hear the trumpet of the elephants, with dread and trepidation we moved among the dense jungle and reached the hill with steep slope down to the river, the river is where most of the wildlife come to quench their thirst, looking down the valley made our heart throb faster and a chill was felt in the spine. How on earth could we make it down there was the first question that came to everyone’s mind, then it was decided that we move sideways down the hill taking zig zag paths and it worked out well. 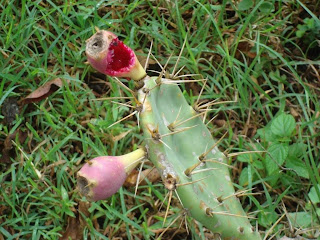 The hill was not only steep but slippery due to the rain drizzle, half the way some of the trekkers stayed back and rest of us continued downwards making our own paths, slipping falling and tripling over stones, it was tremendous to see everyone who tried their best from kunal who was the youngest to nagesh who was young at heart, all of them showed courage, Sanjay despite having injury on his feet, was the foremost among all, We went down near the river almost and it started raining, we had to go down over a rocky and slippery plateau, myself and Jagan tried going down and found it very slippery and came back advising others to take a different route, it was about 4 PM and we have to move back before it gets dark and we get lost in the jungle

While coming up we took a different hill, and both the groups were divided now, we continued our journey upwards and found a heavy breathing sound far away, on going closer we found a herd of wild buffaloes, all staring and ready to charge at us and all of us stood there motionless without any movement thinking what will happen next and without much thought the guide made a hand movement to change our direction and as we moved a little far we were relaxed to escape the wild buffaloes. 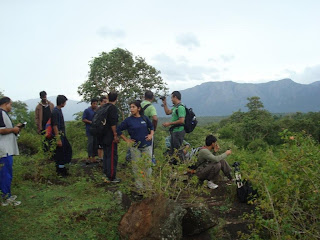 The other group which stayed back on the hill started making panic calls to me, saying they lost they way and they guide with them doesn’t know the way out, to add to the panic the group also found the fresh leopard marks on the route, fortunately they had a compass and we tried coordinating the directions to meet each other but in vain, finally it was decided to take different ways of the jungle and I was glad to get a call they reached a nearby village ahead of us, I know how it feels to get lost in a jungle full of wild animals and wait for the night to appear, it scary and wildest thing that can happen to anyone, when asked how the trek was they group which was lost said they were very glad to make it back and that was the best thing in life. And we all laughed at it enjoying the pleasure that comes after you get out safe from a dangerous situation. 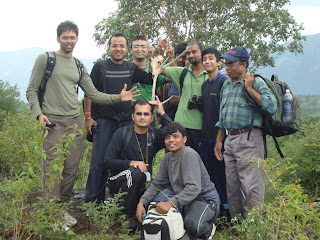 Night 9:30 PM dinner was ready for us and after a long trek of 10-12 kilometers in the jungle were feeling hungry, the menu was chicken 65, chicken masala, chapatti and rice for the non vegs and gobi 65 and veg curry for the vegetarians, the non vegs made best of the both worlds, I could hear the veggies saying finish it off before the non vegs attack their food, we had some sweet vermicelli and mysore pak as deserts, after dinner we all assembled at the bon fire and discussed the journey back home, we were keeping track of the news on the Kurnool floods, We called the KSRTC office to find out that the bus was cancelled and we had to make alternative arrangements for return journey back home.

Getting back home from the trek became a concern and a problem due to the floods as all buses and trains were cancelled, the air tickets sky rocketed in prices but we managed to plan it out together and everyone had made their own arrangement of reaching back home by flight or buses taking a alternative route 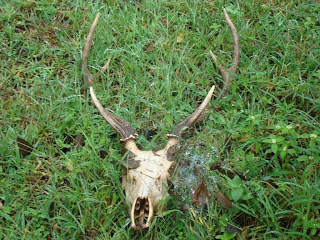 On 4th October 2009 we started early morning 7 am, had out breakfast and got into the minibus and went on the way to ooty, there are 36 hair pin bends on the ooty Ghats and the scenery was amazing, we could feel the pressure dropped as we moved up, we stopped on the way at bison view point only to find monkeys chase us to snatch the apples we were carrying, somehow we managed to give a slip to our ancestors, we have evolved to be smarter then them, we also stopped at kumaraja river which was very beautiful, we witnessed some wild horses grazing around and we took pictures keeping some distance from them and at the same time checking for safety and looking at the camera, we went to pykara water falls and spent an hour there, hour later we said adios to each other we were split in 2 groups, one group that went to ooty and the other that went to Mysore.

The Few of us who went to ooty and visited the botanical gardens and the next day trekked to thondapetta peak in the reserve forest behind the botanical garden which was wild, dense and untouched, full of varied flora and fauna, we found different species of mushroom which were red in color, we also went to the doddabeta peak, it was chill weather and we ended buying some warm clothes and caps for cheap

The wild is still calling, who else is going to answer it next?
Labels: madumalai forest, Masanagudi Jungle Trek, masinagudi